Fair use of copyrighted materials, especially in higher education, is a topic of discussion throughout the United States and of interest in other territories. There have been several recent cases testing the limits and purpose of the U.S.’s fair use copyright rules. These cases may reverberate throughout the United States and beyond as other countries continue to consider the impact of the American fair use rules on their local copyright practices

The following are a few key cases from the past decade when judges have been called on to rule on fair use matters and determine how far the related protections extend. The precedent set in these cases could shape matters of academic usage of copyrighted material in educational contexts in 2020 and beyond.

Google Books vs. the Authors Guild

Is Google Books a legal service? This question fueled one of the decade’s defining fair use cases, spanning 2013-2016 and going all the way to the U.S. Supreme Court. When the high court handed down its final order to close the case in April 2016, Google’s book search engine was not a substitute for the printed books themselves and rendered a service for authors, TechCrunch reported. Thus, the scanning was considered fair use.

Google scanned the copyrighted books, many of which had fallen out of print, and made them text-searchable. The Authors Guild brought the matter to court in the Southern District of New York, and the appeals process brought the matter to the Supreme Court. TechCrunch added that the case reflected an old-fashioned view of books as primarily physical objects.

Use of copyrighted imagery in academic work

In the 2017 case Reiner v. Nishimori, heard by the United States District Court for the Middle District of Tennessee, a photographer disputed the usage of one of his copyrighted photos in a student’s graphic design assignment, which was uploaded to Flickr. A professor gave the photo to students to transform into a mock advertisement, and the court held that such a transformation was fair educational use, and not infringing on the market for the photo.

In an interesting twist on the case, there was some dispute as to who actually owned the picture. A stock photo service, SuperStock, stated the original photographer had signed over all rights for the image. In any case, the court decided the students could indeed alter and upload the image for the class assignment in the educational context of fair use.

A dispute between the GSU library and academic publishers has been ongoing for nearly 12 years now, and Publishers Weekly reported in April 2019 that the matter was heading back into district court for a third time. A short summary of this extremely long-lasting matter: According to three publishers supported by the Association of American Publishers and the Copyright Clearance Centre, when GSU administration advised professors that they could provide students free, unlicensed versions of course reading materials, the school violated copyright law, Georgia State University disputed the instances of claimed violations and the litigation has seen the number of claimed violations diminish over the span of the litigation.

The third ruling in the case may still not settle the matter of academic use vs. market harm, as the 11th Circuit is only binding in Alabama, Florida and Georgia, Publishers Weekly explained. Further complicating matters is the fact that during the case’s decade-long span, commonly accepted models for academic e-book sharing have evolved significantly, with publishers and schools often working together. This lengthy case has the potential to set the tone for college fair-use interpretations in the future and has influenced discussions for a decade now. Neither the University nor the plaintiffs have been able to find a mutually satisfactory conclusion and as such this case is very much a potentially precedent defining one.

While the picture continues to clarify around fair use, it’s apparent that educational libraries need reliable ways to track their resources and ensure correct and prudent fair use and copyright compliance at all times. choose eReserve Plus for this purpose, with its built in Fair Use Assessment workflow to help guard against legal issues no matter what the next decade and legal determination brings. 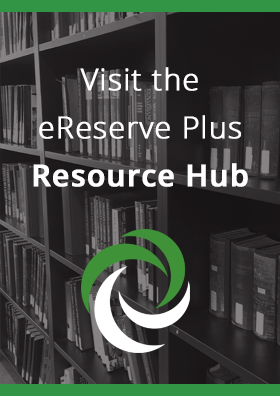